Since giving up my consulting business in Maine and moving to Faro, I’m finding I have more time to think about how I want to spend my time . . .  and money. I have also been noticing that more is being written on how to spend your money — probably because I’m living on a set budget.

What I am hearing and reading is that it is wiser to spend less on things and more on life experiences. You can read (see above) what the experts are saying so I won’t go into the “why.” Having just shed 98% of my material things to move overseas, I have to say, I like that advice. I’m also at an age where I believe I have lived over half my life. I’m 59 years old and I like red meat, alcohol and ice cream —  you do the math.

I learned in marketing seminars, that people will spend more money on experiences that they cannot create for themselves. For example, when I worked at the French Culinary Institute, I learned that people were willing to spend a boat load of money to cook with Jacques Pépin or other celebrity chefs. I get it, it would be a difficult experience to arrange on your own. I’ve decided to create more experiences based on what I have desired, dreamed or thought about in the past.

I know this will sound crazy, but I love sleeping on boats and I don’t mind if they’re not moving. I know that unless boats are dry docked, they’re always moving; but you know what I mean. One of my favorite vacations was a tall ship cruise off of the coast of Maine. We stayed anchored near to the coast in the evening and that slow and steady rocking would put me to sleep. We sailed and docked at different towns during the day. So I planned a big adventure aboard a 34 foot, classic Swedish yacht, docked in the marina in Portimão, Portugal. 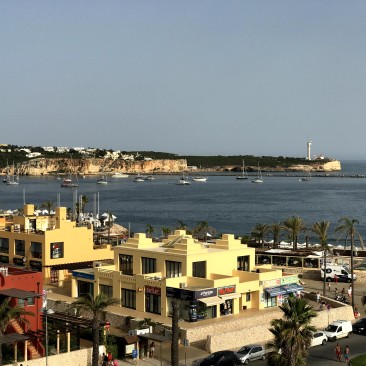 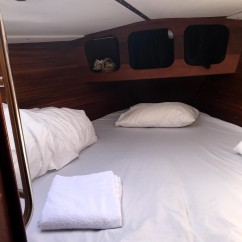 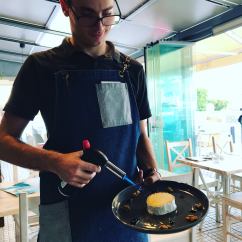 Yes, that’s my Macbook baking in the sun. And that’s the bed I had to crawl in and out of.

I visited Portimão briefly a few months ago. It is in the Algarve; therefore, very easily accessible by train or bus, there are many restaurants, beautiful beaches, and they have a casino. I figured now that I have a wonderful woman named Sandra to take care of Giorgio, I could enjoy a few of days of sun and fun; doing something I’ve never done before.

I’m still having trouble managing the train and bus schedules here. I waited on the train platform for an hour and realized my train schedule was outdated. I walked home — it was 100 degrees; by far the warmest day since I arrived in Portugal. I thought if I could sit in my cool apartment, I’d come up with an alternative plan. The next train was a few hours away, so I looked at the bus schedule. Great, a bus in 90 minutes that would get be there by 4:15 p.m. I lost a big part of the day, but my host was willing to pick me up at the bus stop. Honestly, the heat was extremely oppressive and I never drink enough water, therefore, my brain was fuzzy. I arrived at the bus terminal at about 4:30 p.m.

I settled onto my yacht (I like the sound of that), showered and headed for a nearby watering hole. I had a frozen daiquiri because I was very thirsty and I have to say, it was probably the best daiquiri I’ve ever had — fresh strawberries and as I said, it was extremely hot outside. When I finished my cocktail, the sun had gone down and the heat was more bearable. I walked to the casino (everything was in walking distance from the marina), and discovered the blackjack table wouldn’t open until 8:30 p.m. I played some slots (hate slots) and of course, regretted it immediately. By this time I was hungry and I thought that 7:30 p.m. was a safe bet for getting a table at a restaurant. The great thing about eating early in Portugal, is that you almost always get a table. Avoiding the smokers wasn’t easy; however, I managed to get a corner table at a nice tapas wine bar with a great view of the ocean and lots of people watching. I had a nice dinner and I’ll leave it at that.

After dinner it was time for some blackjack at the Casino. I’m not a big gambler; but I do enjoy an hour or two of gaming. There was only one blackjack table, so I had no choice concerning where to play. I observed the table for a bit before diving in. There was a crazy Frenchman chastising this poor newcomer to the world of gambling at the table. The bewildered chap had no idea what he was being yelled at for and I could tell he wouldn’t last. In blackjack, the last seat at the table leaves one open to the scrutiny of the other players. Making the wrong decision could prevent the dealer from busting and nobody at the table likes that. The chap left shortly after my arrival. Anyway, I wasn’t there very long and a woman visiting from China sat down beside me. We were both enjoying the crazy Frenchman’s antics and started chatting it up. Well Frenchie didn’t appreciate that we were talking and started giving me a hard time. Had he known I was from Brooklyn he might have thought twice about confronting me. Long story short, I gave him a piece of my mind and the pit boss came over to tell him that if he didn’t behave he’d be thrown out. That made him even angrier and he lost his concentration, made some stupid moves (like sitting on 12 when the dealer had a jack showing) and started losing big money. I admit I was secretly pleased. After awhile I got bored watching my Chinese friend rake it in while I lost almost every hand and I left. I did put 20 Euros into a slot machine because I’m a glutton for punishment.

Time to go back to the boat to enjoy the “experience” I paid for. Here’s are some thoughts before you run to purchase a boat:

Exhausted from no sleep, I made myself some breakfast. The owners left me some delicious oranges to squeeze and some other healthy breakfast treats. I ate on the deck and watched the sunrise. I decided that it would be nice to spend the day at a pool club on the ocean. I had no interest in doing any group tours and I have a cave trip coming up in Lagos in a few weeks. Don’t worry, these are shallow caves.

When I got to club, the receptionist politely asked if I had a reservation and of course, I did not. She looked down at this massive chart and every beach chair had an X over it. I spotted one that was sort of half rubbed out and asked her about that one. She said, “Um, I don’t know,” and called over a colleague. Her colleague informed us that the party who had that pair of chairs had just cancelled. Well, there you go then, one of those two chairs was meant to be mine. I was fortunate that they didn’t have a “you had to rent two” policy. The beach club wasn’t cheap, but I honestly loved the people watching and the club was beautiful. I decided that they were probably not well-known for their food, so I decided to eat at an authentic Portuguese restaurant right next door. I made the correct choice, the food and the view were the highlight of my weekend (I’m not endorsing any businesses in this particular blog). A beautiful green-eyed black cat joined me for lunch. He was affectionate, sweet and very hungry. This always seems to happen when I’m missing Giorgio — animals sense everything.

I was pretty certain I’d have lunch and then nap all afternoon, but for some reason, sleep was elusive. Instead I drank frozen daiquiri and ogled the pretty people by the pool. I was struck by how many lovers there were enjoying a day at the club; lots of PDA (public display of affection for my older readers).

At about 6:00 p.m., I headed back to the sail boat. I thought I’d have a gin & tonic (like the Brits) and read Past Imperfect by Julian Fellowes — the perfect novel for this occasion. I took a sponge bath and it didn’t help, it was too darned hot. There was smoke in the distance and you could feel the intense heat from the fires in the hills. Soon after I cracked my book open, the wind started howling and the boat starting rocking fiercely. Not long after, it started raining. It’s been weeks and weeks since I felt a rain drop and this made me happy. You would think wind and rain would bring relief, fat chance.

I slept a little better, but there was a massive “Back to the 90s” concert in the distance and falling asleep to Cher is like sleeping while standing; it ain’t gonna happen.

Again I watched the sunrise and had a healthy breakfast. The oranges in the Algarve are unbelievably sweet and tart and even a little salty; I had fresh squeezed juice again. My dad squeezed fresh oranges every morning when he retired in Florida.

I knew the heat was coming and I wanted off that freakin’ boat before it arrived. Now that I had learned to read the bus schedule, I knew when and were to catch the one that would drop me off a few feet away from my apartment. I was home by 11:00 a.m. and Giorgio was back in my arms by 12:30 p.m. 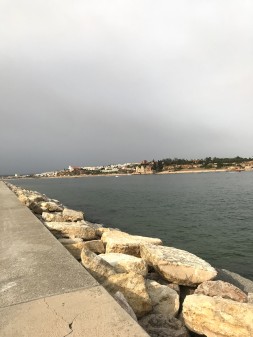 Looking back on my adventure, it’s safe to say I have no regrets. If I had known what I was in for, I would have chosen to book it in September or October. But honestly, life doesn’t happen unless we make it happen. This past weekend, life happened.