“Existence is no more than the precarious attainment of relevance in an intensely mobile flux of past, present and future.”

I need to feel relevant. Whether or not that will happen today, is yet to be seen.

Working at the French Culinary Institute in New York City occasionally afforded me the opportunity to taste and evaluate dishes prior to a restaurant opening or before a new seasonal menu was released. Last week I received a call from Miguel, the owner of Mercedes Country House, about a new restaurant opening in downtown Faro. The name of the restaurant is Shiraz.

Shiraz is owned by Mr. Thomas, born in Iran, lived in Germany for many years, and currently resides in Portugal. Mr. Thomas has a restaurant in Cascais and he recently purchased and remodeled a space in Faro. Miguel and Mr. Thomas are friends and Miguel suggested that the tasting take place at The Mercedes House where there are guests who know good food and there is plenty of parking. I’ve had Miguel’s cooking several times, Miguel knows food. Miguel insisted that I meet Mr. Thomas.

I was happy to meet him because Faro does not have very many non-Portuguese restaurants. There have been a couple of new and trendy restaurants recently; it is obvious the landscape is changing. I imagine it has something to do with an influx of tourists from all over the world. It is obvious that people visiting Portugal love Portuguese food, especially the fresh fish, but variety is essential for vacationers. Shiraz will be an Asian restaurant; that’s a really good thing.

I thought I would have an opportunity to interview Mr. Thomas, but he unfortunately did not get to sit down at the table until the end of the tasting and I did not think it would be fair or appropriate to monopolize his time. I’ll do a piece about him and the food at Shiraz after it opens.

There were at least ten tasters sitting at one large table. Fish is a tricky dish to evaluate due to different likes and dislikes when it comes to texture and taste. Individuals usually have very strong opinions about the fish the prefer or dislike. What I found most interesting about this particular tasting panel, was the diversity of the panel; visitors from several countries were asked to participate. Early on in my tenure at the French Culinary Institute I met Julian Alonso a graduate of the school. He was the Chef de Cuisine at The Sea Grill at Rockefeller Center. He taught me that the fish I disliked, I disliked because when I ordered that fish, it had not been prepared properly. I sampled five or six different types of fish that day that I would have never ordered from the menu. Chef Julian’s dishes were all exquisite. One dish after another changed my way of thinking about fish. I went into this tasting keeping Julian’s words in mind.

We started with mackerel and went on to taste, spider fish, sea bass, grouper and ended with prawns. All of the dishes were served with basmati rice and curry. The objective, with all things being equal, was which fish paired well with this particular curry sauce. It would be unfair to give away my favorite, however, one or two of the types of fish I sampled, did stand out.

We were each asked to complete an evaluation form, rating each dish on a scale from one to ten, ten being the highest score. I must admit that all of my scores were high, save for one — no matter what anyone does to mackerel, I cannot bring myself to enjoy it.

The dishes were paired with a delicious Portuguese Vinho Verde. The name Vinho Verde refers to the lush green landscape where the wine is produced.

We were not asked our opinion about the name of the restaurant, however, I will weigh in. What I like about the name is two things:  first, I love wine made from the Syrah grape (sometimes a blend), and second, the name conveys, albeit in a subtle way, that Iran was the inspiration for the restaurant. Having not spoken to Mr. Thomas about this matter, I should reveal that I am only speculating. 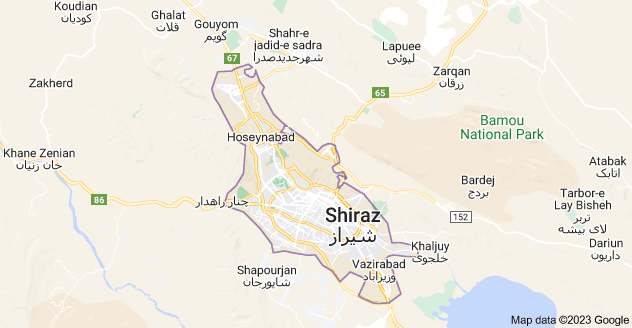 Iran
Legends of Syrah’s origins come from one of its homonyms, Shiraz. Because Shiraz, Capital of the Persian Empire (modern-day Iran), produced the well-known Shirazi wine, legends claim the Syrah grape originated in Shiraz and then was brought to Rhône (Wikipedia).

The menu is, of course, extremely important when designing a restaurant, however, the name of a restaurant is equally as important. Give a restaurant a name people do not understand or cannot pronounce, and they will not come.

The School of Management, Hospitality and Tourism has an impressive campus located close to the Ria Formosa in Faro. One of the offerings at the school is a highly regarded culinary program. I attended a beautiful event at the school and I had an opportunity to taste the food prepared by the students. It was my understanding that school was not in session, however, several students volunteered to prepare the sit-down, multi-course dinner. The food was terrible. And I mean all of it. It’s been over a year so my memory is not 100%, but I believe dessert was edible. I thought that because of my work in the culinary industry, I could help. I didn’t think it was appropriate to bring this up on the night of the event, so I waited.

I wrote the the event organizer and shared my disappointment about the food. She informed me that she had already received numerous complaints. I asked her who I could speak to at the school about volunteering to help with the curriculum. She implied that I should contact the head of the program, but I probably would not get very far. Being bullheaded and persistent, I decided that I would give it a try. I wrote to the culinary department and after a long wait, I received a brief email telling me that the person I needed to speak to was on vacation and that my email would be forwarded to him. I was told that I would hear from him when he returned. Weeks went by and I heard nothing. I wrote several emails and no reply. I spoke to a couple of Portuguese residents of Faro about my frustration; they told me that they were not surprised. I was basically informed that people here were very proud and they do not welcome outside help. I believe there is an expat influence that is changing that. For now, I just have to accept that this school would rather not have me as a volunteer.

I will be showing up at the hospital sometime in the next few weeks. It is my hope that they will welcome me as a patient relations volunteer; if not, I’ll move on to the next thing . . . until I feel relevant.

French food & wine with friends, it doesn't get any better.
Family visitors (sis and brother-in-law)
Good friends from California
Tonkotsu ramen and what was an old fashioned in London - - my second city
Gosh I do love women... And Ireland
Loading Comments...
%d bloggers like this: